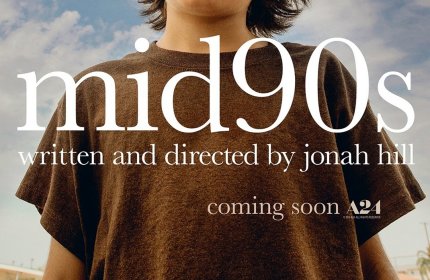 Jonah Hill is a good actor. Two Oscar nominations! His directorial debut Mid 90s, however, is a tedious slog. Run time is a mere 80 minutes; it just seems longer.

Mid 90s is a coming of age story centered on Stevie (Sunny Suljic), a 13-year-old who is physically abused by his older brother (Lucas Hedges) and mostly ignored by his single mom (Katherine Waterston).

Stevie is small and shy. He finds acceptance by a group of older teens who hang out at a skateboard shop. They become a sort of surrogate family for Steve. Stevie becomes a more skillful skateboarder. The older boys introduce Stevie to tobacco, weed, booze, sex and other temptations.

The aftermath of a climactic event reveals the gang’s true feelings for their younger friend. And that’s about it.

For some reason the film is shot in a 4:3 aspect ratio. Narrow screen. Like certain old TV clips look on Youtube. Original music is by Trent Reznor and Atticus Ross.

Jonah Hill also wrote the script. A meatier story line might’ve made Mid 90s a more memorable movie. The characters Hill has created are good. They deserve a better narrative.

Here’s hoping Jonah Hill polishes his directing talent and his next effort achieves some of the heights he’s reached with his acting ability.