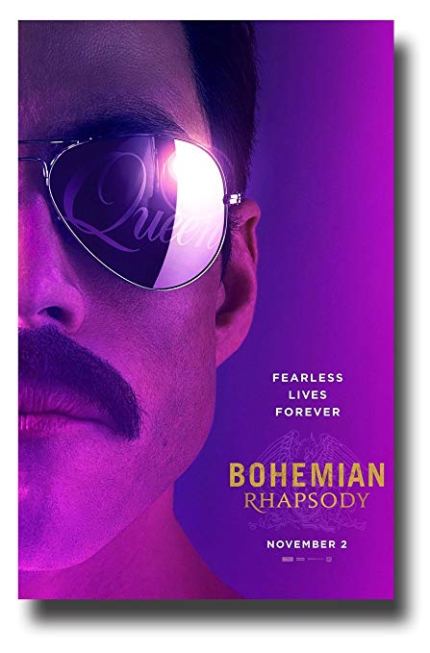 The musical performances in Bohemian Rhapsody are brilliant. Exciting. Thrilling. The biopic that surrounds the music is okay but not as special as trailers might have suggested.

Freddie Mercury’s (Rami Malek) story follows that familiar showbiz path: obscurity, success, excess, debauchery, downfall and, finally, redemption. Whether it’s vital that an actor resemble the real-life person he/she is portraying can be debated, but Malek does look like Mercury, especially with the moustache.

But his prosthetic teeth eventually become distracting, almost like the ones Mike Myers wore in the Austin Powers movies.

Speaking of Myers, he plays a record exec who snubs the song Bohemian Rhapsody because of its length. Interestingly, the song is not performed in its entirety in the movie. Too long, maybe? (Snippets are heard.) The depiction of the recording of the song is one of the film’s highlights.

Myers’ casting appears to be payback for his giving the song new life in the 90s by using it in Wayne’s World.

I like Queen. I played their music on radio. I appreciated that they delivered a variety of sounds and styles in their tunes. The song Bohemian Rhapsody stands tall among the mostly tired and overplayed music genre known as “classic rock.”

Hardcore Queen fans will find much to like here. Boomers and Gen-Xers who thrived on Queen’s music will enjoy the nostalgia and may pick up unknown or unremembered tidbits about the band’s time in the sun. Millenials and Gen-Zers who adore Malek in Mr. Robot will want to check him out in this role.

With all those constituencies already titillated by the preview trailers, Bohemian Rhapsody should be a gorilla at the box office. Enjoy the music!

Lee Isreal (Melissa McCarthy) is not an easy person to like. She lacks the social graces. She drinks to excess. She is a bit of a slob.

She does have writing talent. She’s a published author. When her career hits the skids, she turns to another kind of writing.

One might be prone to feel sorry for her. However, as her agent (Jane Curtin) and her ex-partner (Anna Deavere Smith) point out, her off-putting behavior is of her own doing. Isreal even admits she like cats more than she likes people.

Isreal’s scheme is to produce notes and letters she claims were written by now deceased literary figures. “Can you ever forgive me?” is the tagline on a note she crafts and presents as having come from Dorothy Parker. She sells these letters to bookstores who sell them to collectors.

[Sidebar: I went to my first baseball card show in Willow Grove PA in 1981 and saw autographed photos of big league ballplayers for sale. I noticed the signatures all looked alike. In 1998, Mark McGwire went into card shops around the US and found items alleged to have been autographed by him. He said they were not authentic. Two conclusions, which Isreal also reached: People are suckers and there is a lot of fake stuff out there.]

Isreal buys vintage typewriters and consults old printed matter to crib material for these letters. But she and her drinking buddy Jack (Richard Grant) make a couple of errors that lead to her getting caught by the feds for her fraudulent practice.

Can You Ever Forgive Me? features a different Melissa McCarthy. She’s not completely unfunny. Her character has a nasty sense of humor. But the energetic, vibrant, fearless McCarthy from her comedy roles is dialed way, way down. Her look is muted, plain. And her character is, as mentioned, a sad sack of a human. Is this a role that can net McCarthy an awards nomination? Stay tuned.

There’s a flash of the more familiar Melissa McCarthy when Isreal makes a statement to the judge during a court proceeding.

Can You Ever Forgive Me? is not a crowd-pleaser type of film. But for all who have appreciated Melissa McCarthy’s comedic work in movies and TV, this movie reveals that she definitely can handle a wider range of roles.