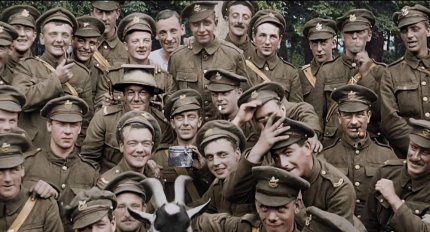 World War I is not exactly a forgotten war. But it has been eclipsed by WWII, Korea, Vietnam and recent Mideast action in popular U.S. memory. Even the long ago Civil War is more familiar to most Americans than WWI, thanks to Gone With The Wind, Ken Burns and recent statue controversies

They Shall Not Grow Old may elevate WWI’s profile just a bit. The film focuses on British troops from their enlistment through their return home from battle with the German enemy.

The technical achievements used to make archival film footage from a century ago appear realistic are impressive. But it is the faces and the voices of the young men who endure the horror of war that make this documentary a must-see.

Director Peter Jackson of Lord Of The Rings fame and his team have added color, speed correction and ambient sound to take the viewer into the trenches and onto the battlefield. The actual hand-to-hand combat is presented via illustrations, but the damages of battle—dead and injured soldiers—are impossible to miss.

Over a hundred men who fought in the war narrate the film. Their recollections, recorded in mid-century, are edited into brief soundbites to tell the story. Some of the British accents are harder to decipher than others. A captioned version of the film would be welcome.

They Shall Not Grow Old reveals the stereotype of bad teeth among Brits to have been a particularly acute problem back then. The few men shown wearing kilts and knee socks to the frontline seems odd. The pleasantries between British troops and some of the Germans they have captured are surprising.

“Man’s Inhumanity To Man” is timeless and unending. To see it up close and personal with real people, not actors, arouses multiple emotions. Among them, empathy for the young men in this film, as well as every other soldier who has seen combat action in every war.

Because of its graphic depictions, They Shall Not Grow Old is rated R.