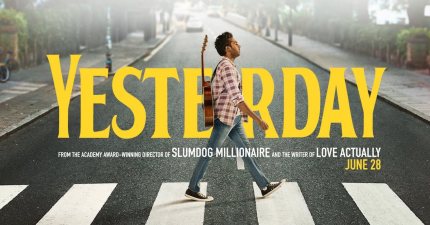 You’ve seen people like Jack Malik (Himesh Patel). Strumming a guitar and singing in the corner of a bar or restaurant. Not awful but also not great. Being ignored by most patrons except a handful of friends.

Jack has a day gig in a warehouse in the UK and is ready to give up on his musical ambitions. Encouragement keeps coming from his manager and biggest fan Ellie (Lily James). But then something outrageous happens that causes the entire world to erase all memory of the Beatles and their music.

Except Jack. He remembers. And his handling of this exclusive knowledge drives Yesterday’s narrative. I advise you to buy into the fantasy and not question certain plot points. You’ll like (and maybe even love) Yesterday more if you play along.

When Jack performs Beatles songs as his own compositions, people are impressed by these classic tunes. Because they are new to them. He’s stunned when Ed Sheeran (as himself) knocks on his door to draft Jack into his musical realm.

Jack enjoys the fruits of worldwide success but knows that he is a fraud. He likes the acclaim but is conflicted with guilt feelings. Meanwhile, Ellie, who is left behind when Jack goes abroad, keeps appearing on the edges of Jack’s orbit.

Will Jack’s fake songwriting ability be uncovered? Will Jack and Ellie become a couple? Will music biz manager Debra (Kate McKinnon in a hilarious role) ever let up the gas on her hard-nosed attitude?

Director Boyle, whose resumé includes Trainspotting, The Beach and 127 Hours along with Oscar winner Slumdog Millionaire, delivers a movie that is consistently visually interesting—at times to advance the story and at other times to keep his audience involved. Musical performances in film can sometimes be tedious; in Yesterday they all look good.

The script is by Richard Curtis who has also has an impressive curriculum vitae. Films he’s written include Notting Hill, Bridget Jone’s Diary, War Horse and Love, Actually. Yesterday is a movie that’s funny but not annoyingly so. The romcom angle may be subtle to some viewers but will be plainly obvious to those looking for it.

A must-see? Maybe not. But this fun, light story—featuring some of the best pop music of our lifetimes—will make you happy.

“Tell me a story.” Mission accomplished again by Pixar. Toy Story 4 shows that you can go to the sequel well over and over if you keep delivering compelling stories.

Oh, and it helps to have characters who are, by now, not just familiar but also beloved. Cowboy Woody (Tom Hanks) gets the main spotlight in TS4. He’s one of many toys in the closet of young Bonnie (Madeleine McGraw) and he is NOT one of her favorites. But he’s the one who is most concerned about Bonnie’s ability to cope with the pressures of kindergarten orientation.

A handmade toy that Bonnie assembles from a plastic spork and a pipe cleaner becomes her primary concern. “Forky” (Tony Hale) becomes a member of Bonnie’s toy menagerie but he has little self-respect. Woody steps in to help him focus.

Bonnie’s family takes an RV trip to a town with an antique store. The store and its wares provide an intriguing setting for toy adventures.

Woody reconnects with Bo Peep (Annie Potts) and meets new characters Gabby Gabby (Christina Hendricks) and Duke Caboom (Keanu Reaves). The latter two are inspired by Mattel’s Chatty Cathy and the Evel Knievel motorcycle toy that never performed quite as well in real life as on the TV spot.

Buzz Lightyear (Tim Allen) keeps showing up and continues to push a button on his chest that generates a recorded soundbite. He considers this his “inner voice” and takes guidance from those brief gems.

Among the film’s most entertaining voice actors are Keegan-Michael Key and Jordan Peele as a pair of stuffed animals who escape from a carnival game prize wall.

Toy Story 4 is filled with delight and fun surprises from beginning to end. There are a couple of scary situations but the peril is less intense than that seen in Toy Story 3.

Pixar’s animation and tech skills have been a given for a quarter century. Other studios have also turned out impressive images and effects. But it is Pixar’s storytelling ability makes most of their films special.

Toy Story 4 is yet another Pixar winner.

(Note: In a change from the usual Pixar format, there is no animated short running before TS4.)

What a disappointment! What a waste of talent!

It is true that The Dead Don’t Die actually was the opening film of the 2019 Cannes Festival last month. It still stinks.

Who’s to blame? Jim Jarmusch. He wrote the script. He directed. He’s the guy responsible of the slow pace of the film’s feeble story. He’s the guy who is stingy with the funny stuff. For a “zombie comedy,” the laughs are scarce.

The cast includes people you know and like. Bill Murray is a police chief in the typical American small town of Centerville. Adam Driver is his partner. Chloe Sevigny is also on the force. Tilda Swinton is the new undertaker in town. Tom Waits is a local hermit. Also in the cast: Danny Glover, Rosie Perez, Steve Buscemi, Selena Gomez, among other familiar faces.

The set-up: The world is in a minor panic after fracking messes with the earth’s rotation. This triggers, among other events, a return to the above ground world by the previously dead at the Centerville cemetery. It’s a decent framework for comedy storytelling but it never gets traction.

Sturgill Simpson’s theme song is played several times in the film. His song is okay but the running gag is weak.

Look, I’m sure people worked hard to make this movie. I respect their efforts. But The Dead Don’t Die is one you should wait for and watch via streaming or cable. Not worth the price of a ticket.