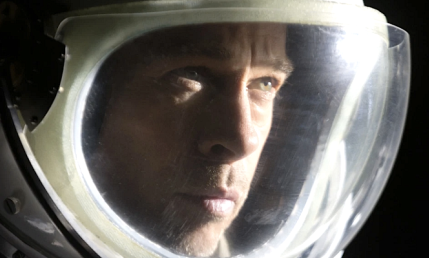 Is Ad Astra more than just another entertaining space drama? Not really. But if you want to layer some special meaning onto the story, that’s your privilege as a moviegoer.

Many males have complex relationships with their dads. This has been addressed in movies ranging from The Empire Strikes Back to Field Of Dreams to the under appreciated 2014 film The Judge. In this sci-fi tale set in the not-that-distant future, a son’s feelings about his father are a key element in the son’s psyche.

Roy McBride (Brad Pitt) is an astronaut whose dad Clifford McBride (Tommy Lee Jones), also an astronaut, led a mission to the outer rim of our solar system and has not been heard from in decades. Power surges that threaten human survival have been linked to this distant outpost just off Neptune.

Roy is directed by leaders here on Earth to go there and fix the situation. He is directed to “fly commercial” to the moon before heading to a station on Mars. Along the way, he gets intel about his dad from a crusty Colonel Pruitt (Donald Sutherland).

Throughout the movie, Roy’s psychological fitness is periodically checked by AI devices. Many of Roy’s inner thoughts are shared via Pitt voiceovers.

On Mars, an evaluation of Roy’s mental state and his emotional attempt to communicate with his dad cause officials to scrub his further participation in the effort to mitigate the Neptune crisis. But he goes rogue and flies off to check on dad.

Ad Astra is filled with amazing effects and images but writer/director James Gray incorporates them in a way that’s not as flashy as those in some space flicks. His futuristic visions seem more matter-of-fact than included for jaw-dropping spectacle. (Or maybe I’ve just seen several space movies in recent years and my personal “wow” level has been recalibrated.)

Brad Pitt brings his usual A game to the screen and shows his range via a character who is wildly different from the one that will likely net him an Oscar nomination. (The expected nod would be for his Cliff Booth in Once Upon A Time In Hollywood. But sometimes awards voters cast a vote for cumulative efforts so his work here can only add to his chances of a win.)

Also in the film are Ruth Negga as a Mars base staffer and Liv Tyler as Roy’s wife Eve.

Ad Astra is a film to be enjoyed for what it is. If you want to read more into it than is made clear in the narrative, go right ahead.

Guardians of the Galaxy is a big ol’ chunk of sci-fi fantasy fun. Because of its characters, the film resembles a cartoon. But it’s all live action, with some help from computer-generated images. St. Louis native James Gunn directed and co-wrote the script.

Earthling Peter Quill (Chris Pratt) AKA Star-Lord is a child of the 80’s who grooves on music from the 70’s. (Come And Get Your Love by Redbone is the film’s opening theme.) He’s the quasi-leader of this motley crew, similar to Han Solo, but with more flaws and funnier.

Rocket Raccoon is a CGI figure that could pass for real. He’s voiced by Bradley Cooper and has a sardonic smart-ass attitude and several good laugh lines.

Another CGI guy is Groot, voiced by Vin Diesel. Groot—who resembles a big tree—is not particularly graceful but he gets to play a vital role as the 5 guardians try to save the galaxy.

Rounding out the team are Gamora (Zoe Saldana), an alien assassin with bad attitude and Drax (Dave Bautista). You saw Saldana as a blue character in Avatar; here she’s green. Drax is an enormous hulk of a creature with a violent streak.

The film’s plot centers around a mysterious orb that Quill has stolen. Bad guy Ronan (Lee Pace) and his henchmen and women want it back.

The story is not why you want to see GOTG. You want to meet and enjoy these characters, especially Quill. This role appears to be a star-making turn for Chris Pratt. (He also was a key player in another of the year’s better films, The Lego Movie. He voiced lead character Emmet Brickowski.)

Another reason to embrace Guardians of the Galaxy is its cool oldies soundtrack. From Go All The Way by Raspberries to It Takes Two by Marvin Gaye and Tammi Terrell. Good stuff!

Is GOTG suitable for younger kids? It’s rated PG-13, so this is where moms and dads will have to exercise real parental guidance. Today’s 8 and 10 year olds may have been exposed to more violent images than Millenials born just a few years earlier, so recommending a minimum age is dicey. But the content has huge kid appeal.

Presuming that your age is well into double digits, I have no qualms about recommending Guardians of the Galaxy to everyone. Big fun!

Elysium looks great. Director Neill Blomkamp who delivered the excellent sci-fi District 9 in ’09 impresses us again with settings and characters that illustrate an extreme political/economic division.

But, while District 9 had a distinctive, creative visual style and delivered numerous surprises, as soon as Elysium sets up its story, it is easy to guess how it will likely end. Getting from start to finish should’ve been a better ride.

Matt Damon plays Max who is lucky to have his tedious factory gig in Los Angeles in 2154. The city resembles present day third world slums in places like Rio or Mumbai. When his industrial machine malfunctions, he steps inside to undo a glitch. He is trapped and exposed to radiation. When his robotic doc tells him he has cancer and will die in five days, he takes action.

While the poor schlubs labor on earth, the planet’s wealthy have taken refuge on Elysium, a giant space station. The pristine mansions and verdant landscapes look like those you might see in Palm Beach or certain wealthy Arab enclaves, such as Dubai. The real attraction of Elysium to the earthbound is access to healing machines that vanquish all diseases.

Max’s childhood friend Frey (Alice Braga) has a daughter with leukemia who could benefit from a ride up to Elysium. Flashbacks reveal Max and Frey’s early bonding.

Meanwhile on Elysium, government operative Delacourt (Jodie Foster) monitors situations on earth (and keeps out the earthly lowlifes) while participating in political maneuverings at the space place. Foster has succeeded in the past playing fierce femmes, but her performance in Elysium is distractingly flat.

Sharlto Copley who was amazing in District 9 is passable here as violent government agent Kruger, who does everything he can to keep Max from making it to Elysium.

Director Blomkamp has stated in interviews that Elysium depicts not just the future, but also the present. The movie’s message is about as subtle as a 2X4 to the head. Yes, we do currently have those economic extremes presented in the movie, but most of the world’s citizens are somewhere in between.

After a spring and summer of good but not outstanding sci-fi films, I was hopeful that Elysium might be the one that would be outstanding. Sadly, it is not. But it looks great!

After Earth is a decent but perfunctory sci-fi movie. It does not break any new ground. There’s no urgent reason to see it now, unless you adore Will Smith (as many fans do).

When you see “Directed by M. Night Shaymalan” at the beginning, you may wonder if there will be trickery or red herrings or left field surprises. The answer is no. You can pretty much see the plot resolution of After Earth coming right down Lindbergh (or other major artery near your respective theater).

The movie is a showcase for Will Smith’s son, Jaden, who plays Kitai Raige. The 14-year-old is a passable actor, but likely would not have been cast in the role were his dad not the main star, producer and story source.

Set in the distant future, a thousand years after Earth has been abandoned, following wars, destruction, etc., Kitai’s home planet is Nova Prime. As befits the sci-fi future, there’s plenty of cool, but stark, architecture. The military uniforms are awesome.

Will Smith stars as Cypher Raige, a military man who’s been away from home too long. He’s similar to Robert Duvall in The Great Santini. Great military man, not so great family man. But Cypher’s ready to retire and hang with the fam… after one last mission.

Cypher takes his son on the mission. And when asteroids damage the spacecraft, an emergency landing occurs on… good ol’ planet Earth! And, for a planet that was left behind because it was uninhabitable, it looks pretty darn good! Oh, there are pesky predators who’d kill you in a second, but the forests appear verdant and the streams and rivers clean.

After the crash landing, Dad is badly hurt and can’t walk. And the device that sends a signal back to Nova Prime is damaged. But there’s another one in the tail section of the craft, a few miles away. So the young and callow Kitai takes off on a journey to find it. Will he make it?

Other than Smith and son, the most notable cast member is Zoe Kravitz, another celeb spawn. The daughter of Lennie Kravitz and Lisa Bonet plays Kitai’s sister. Sophie Okenado is Mrs. Raige.

After Earth is a standard, run-of-the-mill sci-fi flick. It’s not awful, but there’s really nothing here to get jiggy about.

Time travel is often used as a gimmicky crutch, as in the TV series “Lost.” To build a whole movie around time travel is risky. When a character interacts with his older self, things can get confusing. Gordon-Levitt and Willis play the same character, Joe, at different ages.

The movie is set in a not-especially-futuristic-looking 2044. Most of their vehicles appear about the same as those we drive today—except for that one cool jet-powered scooter. In 2044, time travel has not yet been developed. But 30 years beyond, time travel has been perfected. But it’s only used by the bad guys.

Because, we are told, it’s hard to dispose of human bodies in 2074, mob hits are accomplished by sending the poor suckers back to 2044 where they are quickly offed and tossed into a furnace. Among those sent back to be killed are older versions of some of those young assassins. They “loop” back, hence the title.

One looper who is sent back—the older Joe—escapes death at the hand of his younger self. He begins a mission to kill a 2044 vintage kid, before he grows up to become a gang leader called The Rainmaker. Still with me? This is where Emily Blunt comes in. She is a single mom, living in a rural farm house with her precocious child. Her kid may the one who would become the Rainmaker. The boy does have some mighty anger issues!

Jeff Daniels gives a standout performance as a crime boss with a wicked sense of humor.

“Looper’s” plot is messy. The movie’s pace hits the brakes just past its midway point. And the sci-fi lacks those “oh, wow” effects/settings/technology that you expect in a movie like this one.

“Looper” is not a bad movie, just one that needs more truly compelling content. One might presume that writer/director Rian Johnson figured the time travel bit might be a strong enough frame to build the movie on. Not quite.