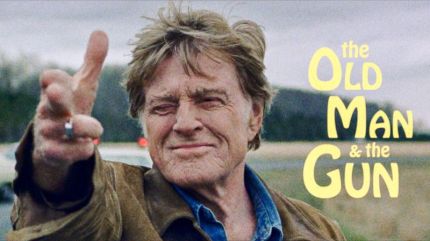 The Old Man And The Gun has all those classic indy film elements: quirky characters, quirky plot, a few slow periods where little happens, a mediocre song and a general low budget look.

But this one also has Robert Redford! He may have lost some speed on his fastball, but he still cuts an impressive figure on a movie screen. And he is fun to watch in this one. (Redford just turned 82 in August, FYI.)

Forrest Tucker (Redford) was a real life bank robber. (Not to be confused with the “F Troop” actor.) For Tucker, robbing banks is a bit of a sport. He’s polite to bank staff (and to the authorities who arrest him), not like the fearsome trigger-happy criminals often seen in films and on TV.

As he flees the film’s opening heist, Tucker stops to help a woman whose truck is broken down on the side of the road. He invites her to join him for a bite. So begins his relationship with Jewel (Sissy Spacek). She is charmed and they begin to get together often for apparently non-carnal reasons.

Casey Affleck mumbles his way through his role as Dallas police detective John Hunt. After the feds take over the pursuit of Tucker, Hunt sniffs out Tucker’s backstory, which features a life of crime and incarceration. Also in the cast are Tucker’s sometime accomplices played by Danny Glover and Tom Waits.

For a movie about a bank robber, with car chases and other tense situations, The Old Man And The Gun is relatively light entertainment. Redford’s smiles and chuckles play a big part in softening the feel of the film.

David Lowery is the movie’s writer/director. He did an interesting crime drama I enjoyed (also featuring Affleck’s mumbles) in 2013 with the puzzling title Ain’t Them Bodies Saints.

Supposedly this is to be Redford’s last movie. But, as with many music acts who’ve had farewell tours and then later reappeared on stage, there’s a Bond title that applies here: Never Say Never Again. Whether he returns to the screen again or doesn’t, it’s good to have one of one of filmdom’s greats back in a starring role right now.

The look, the sound, the mood, the time and the place of Ain’t Them Bodies Saints are classic. The cast is brilliant. The story, though somewhat predictable, has enough layers to keep moviegoers entranced from start to finish.

Ruth (Rooney Mara) and Bob (Casey Affleck) are young lovers in a small Texas town. They steal. They are chased. In a shootout, Ruth shoots a deputy in the shoulder but Bob takes the fall and goes to jail. The scene where Ruth and Bob are being led away from the shootout is one of the year’s best as they hold hands, whisper to one another, then are pulled apart.

Four years later, after Ruth has given birth to their child, Bob escapes. Deputy Wheeler (Ben Foster) breaks the news to Ruth and we see that he has feelings for her. (The deputy does not know that Ruth was the shooter who took him down.) Foster embellishes his performance with a distinctive cop swagger.

Keith Carradine plays a local shopkeeper whose son was an accomplice to the robbery and was killed in the shootout. While he befriends Ruth, he maintains a grudge against Bob. Escapee Bob visits his store and he tells Bob to stay away from Ruth and the girl. Fat chance.

Nate Parker is a local bar owner who provides a place for his old friend Bob to crash while he is on the lam. When deputy Wheeler comes looking for Bob, Parker’s character diverts attention while Bob jumps out a window.

Ain’t Them Bodies Saints is set sometime in mid-twentieth century. The gas guzzler sheriff’s cars appear to be mid-60’s vintage. The film recalls the 1973 movie Badlands with a young Martin Sheen and Sissy Spacek as violent heartland killers. But Ruth and Bob are not so heartless.

Director David Lowery (who also wrote the script) has crafted a film with muted colors, frequent use of sepia tones and many almost monochromatic shots. The toned-down color, combined with some of the wardrobes, gives Ain’t Them Bodies Saints the feel of a Western movie in many of its scenes.

Though set in Texas (and filmed in Louisiana), ATBS looks like it could be anywhere in flyover country. Despite its chases and gunplay, much of the film has a relaxed pace. With its classic feel and strong acting performances, expect Ain’t Them Bodies Saints to show up on a few Top Ten lists at year’s end. Festival prizes already scored may be echoed in a few months by other awards groups.

Top cast members are Rooney Mara as the seemingly weak young woman who manages to gain strength and raise her daughter and Ben Porter as the deputy who finally gets the courage to express his feelings for Ruth. Casey Affleck’s mumbling may play against his chances for awards noms. Keith Carradine’s performance as a man with many motivations could also earn some awards love.

Ain’t Them Bodies Saints is one of the best movies I’ve seen this year. It has a good story told well and good characters acted well.