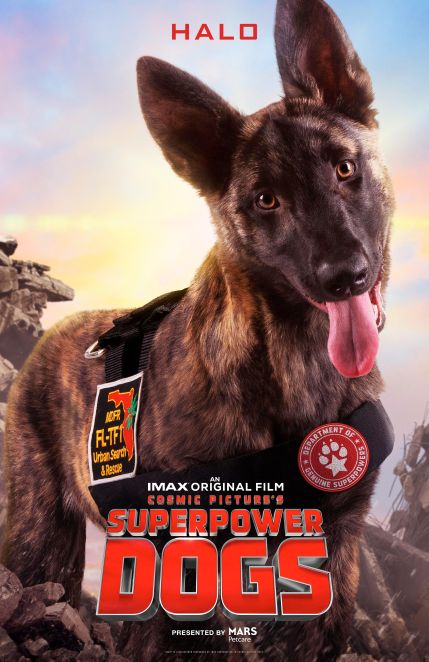 Dogs are fun. Beloved members of the family. Most people ask little of their dogs beyond companionship.

The dogs featured in the new IMAX film Superpower Dogs are dogs who work. They are trained to rescue and to track.

As is the case with many IMAX films, Superpower Dogs has spectacular visuals. A dog is helicoptered in to find a skier trapped by an avalanche. A dog dives into the ocean to practice a water recovery. Bloodhounds track poachers. These segments have gorgeous aerial shots of the Canadian Rockies, the Mediterranean and the plains of Africa, respectively.

A California beach scene is the setting for a dog who surfs (!) and provides emotional support and delight to special needs children.

The development of Halo, a Dutch Shepherd, as a search and rescue dog begins with her selection in Michigan.  Her story continues throughout the film with her training in multiple locations and her testing in New York.

Superpower Dogs is one of the better recent IMAX films. Its pacing is brisk. Its stars are compelling and charming. Clever graphics illustrate such aspects as the underwater movement of a swimming dog and the internal receptors that give bloodhounds their special talent.

Director Daniel Ferguson has assembled a cinematic canine collection that will certainly please dog lovers and will likely amuse cat persons as well.  is narrated by Chris Evans.

The Walk is a technical marvel. The reality created onscreen—that the Twin Towers of the World Trade Center are standing and a man is walking between them—is awe-inspiring.

Viewed on the IMAX screen in 3D—the recommend way to see this one—watching the recreation of Phillipe Petit (Joseph Gordon-Levitt) completing this real-life high wire walk is thrilling.

Back in the 60’s, Cinerama (with its 3-screens surrounding the viewer) was an immersive experience that caused some moviegoers to have slight motion sickness. Dramamine may not be necessary for The Walk, but if your acrophobia is acute, be prepared to be just a bit uneasy.

Surprisingly, The Walk also touches emotions. There’s the exhilaration of Petit and his crew successfully pulling off the stunt. There’s also the shared anguish we all feel for the buildings and their destruction on 9/11/01. Seeing the buildings standing tall in the distance during Petit’s narrations delivered from the Statue of Liberty recalls their prominence in the New York City skyline. It feels good to see the World Trade Center as it was before the attack.

Director and co-writer Robert Zameckis tells the story of a driven young Frenchman who plans and executes his amazing 1974 walk between the two buildings. Petit is a street performer who, at a young age, sees circus performers on high wires. He seeks guidance from Papa Rudy (Ben Kingsley) a veteran of the high wire. His team of “accomplices” includes romantic interest Annie (Charlotte LeBon), Jean-Pierre (James Badge Dale) and Jean-Louis (Cesar Domboy).

The best “true story” movies are the ones that create tension, anticipation and yes, suspense, even when the moviegoer already knows the outcome. A prime example is Apollo 13. The Walk is similarly successful in building up for 90 minutes to the big event, revealing the intense preparation and the recon work to scope out the buildings. In his 1974 walk, Petit was on the wire for 45 minutes. In The Walk, he is on for 15-20 minutes, but each moment, each step is fraught with perceived danger.

Go for the visual thrills, stay for the emotions. I dined at Windows on the World in the North Tower four months before the 9/11 attacks. I visited Ground Zero in Summer 2002. But even if you’ve never been to New York City, you felt the kick in the gut that the U.S. suffered that day. The computer-generated depictions of the towers in the film moved me.

Joseph Gordon-Levitt is the star of The Walk. But the World Trade Center plays a major supporting role.

This is one of the all-time great films. The story, the screenplay, the soundtrack, the acting, the directing, the stunts, the effects—all winners!

It’s the story and its telling that give TDKR a specialness that the other Christopher Nolan Bat movies didn’t have. The others had bombast and standout performances, but TDKR has more heart and soul. Christian Bale as Bruce Wayne/Batman is heroic, to be sure, but is presented here as more human and more vulnerable (in numerous ways). His transition from a limping, Howard Hughes type recluse back to Bat mode sets the film in motion.

Nolan and Nolan (director and co-writer Christopher and his co-writer brother Jonathan) give memorable lines to several of the key players. Michael Caine as Alfred is in tears as he advises Wayne not to go back into the Bat suit. Joseph Gordon-Levitt as police officer John Blake, a longtime Wayne admirer, tells Wayne his emotional story of life in an orphanage. Gary Oldman as Commissioner Gordon hesitates to tell the truth about Batman, lest he mar the legacy of Harvey Dent.

The ladies are better in this Bat movie. Anne Hathaway as Selina Kay/Catwoman is a beguiling mix of evil and good. Plus, she looks terrific in the leather jumpsuit. Marion Cotillard as Wayne Enterprises board member Miranda Tate shares a romantic interlude with Bruce Wayne and is a key character in significant plot points.

Tom Hardy is evil incarnate as Bane, the terrorist who brings fear and havoc to Gotham. His mask and haunting voice bring to mind classic bad guy Darth Vader. Bane’s violent acts will prompt recollections of NYC’s 9/11 terrorist attacks. His band of thugs commandeers certain defense assets to do harm to Gotham and its defenders.

If this is a movie you plan to see, get into your movie house sooner rather than later. TDKR has content you want to enjoy on the big screen (IMAX, preferably) instead of a small screen. This review contains no spoilers, but others will. Be careful monitoring online forums and social media feeds, so as not to be burned by those who tell too much.

“The Dark Knight Rises” has iconic scenes and dialogue that will endure in my personal movie memory scrapbook for a long time. Expect multiple awards nominations and wins at year’s end. The movie adds another notch to Christopher Nolan’s reputation as one of our great movie storytellers. Like his “Inception,” TDKR is a movie to be enjoyed many times over. But don’t wait for the DVD or Blu-Ray. Witness true greatness at a theater near you ASAP.

Tom Cruise and his MI team are on a mission to save the earth from nuclear annihilation. Sounds like a modest proposal, right? But it turns out to be rather complicated.

The team busts Tom (as Ethan Hunt) out of a Russian prison to the accompaniment of Dean Martin’s “Ain’t That a Kick in the Head.” They survive an assassination attempt in Moscow, then head off to Dubai to execute a scheme at the tallest hotel in the world.

You just know that some kind of stunt will involve the risk of falling a hundred stories or more and the filmmaker does not disappoint. This is one of the more exciting sections of the movie. After the scam occurs with partial success, it’s time for the team to go to Mumbai to scuttle the launch of a nuke targeted for San Francisco.

Throughout the movie, you will enjoy chase scenes (by car and foot), gunplay, hand-to-hand combat, a really big sand storm and some cool electronic surveillance. Should you notice any holes in the plot, or occurrences that defy all belief, don’t worry. Just enjoy.

If you can, see this in the IMAX or large screen formats. It’s a big movie and it looks better on the bigger screen. The film is directed by Brad Bird, best known for directing Pixar hits “The Incredibles” and “Ratatouille.” As he did with “The Incredibles,” he has delivered more fast-paced action/adventure fun.