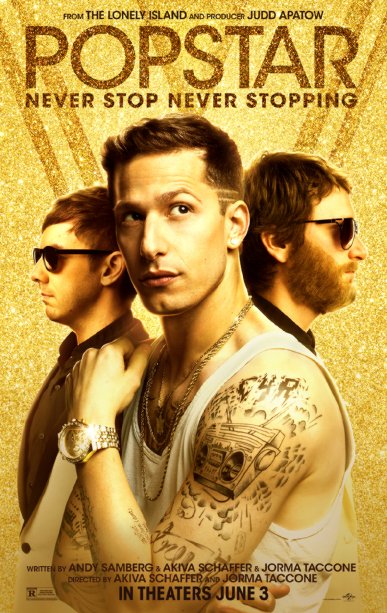 You just know that the mockumentary Popstar: Never Stop Never Stopping is going to be funny. But will it be clever funny or stupid funny? Turns out it’s a bit of both.

You also just know that Popstar, with Andy Samberg in the title role of Conner, is going to have numerous SNL alums in the cast. But who? Well, Maya Rudolph, Bill Hader, Jimmy Fallon, Will Forte and Tim Meadows (who has a big role as Conner’s manager Harry).

One blurb for the movie called it a modern day This Is Spinal Tap. While that comparison is obvious, a few things have changed in 32 years since Derek, Nigel and David mocked the rock music world. Such as holograms, the internet and social media. Also, the good/bad taste boundary has moved, allowing Popstar to include a scene of male “graphic nudity,” as the MPAA describes it.

Speaking of which, the performer who collaborated with Samberg on SNL’s classic “Dick in a Box” song/video appears in the film in an uncredited cameo. I didn’t recognize him until well into the film.

The plot has Conner, becoming the star within a musical trio and leaving his buddies in his dust. Those two are Samberg’s partners in the viral video group Lonely Island, Owen (Jorma Taccone) and Lawrence (Akiva Schaffer). Taccone and Schaffer are the film’s co-directors and (with Samberg) co-writers. When Conner’s newest album bombs, drastic action must be taken.

So how hilarious is Popstar? Much of it is laugh-out-loud funny. But some bits are merely grin-worthy. Credit goes to all involved for throwing a huge amount of “business” into the movie. Not everything connects, but the effort is appreciated.

Special mention must be given to the hilarious parody of the TMZ television show with Will Arnett as the Harvey Levin-type character.

My main complaint is that many of Popstar’s funnier bits are in the film’s trailers. (That’s why I included a poster instead of an embedded trailer at the top of this review.) Yes, it’s a necessary marketing evil in 2016, but it disappoints when the audience explodes in laughter while you just nod acknowledgement at the funny business onscreen.

There has never been a movie with as many totally non-erotic sex scenes as The To Do List. The sex is sometimes quite funny, but it’s doubtful that anyone could be turned on by what happens.

The To Do List reverses the normal pattern of teen sex movies: this time it’s a girl, not a guy, who’s anxious to become sexually active. Writer/director Maggie Carey brings many teen sex comedy staples to The To Do List, but delivers them from a different point of view.

Recent high school grad and virgin Brandy Klark (Aubrey Plaza from Parks and Recreation) is told by her older sister Amber (Rachel Bilson) that she, Brandy, needs to learn everything about sex before she gets to college.

The To Do List is hardly wholesome, but it’s not sleazy. Brandy’s list of sex acts (some of which end with “job”) is composed not with an attitude of unrestrained lust, but with an almost innocent curiosity. The To Do List is, appropriately, rated R, but there are no bare boobs to be seen here.

Bill Hader of SNL-fame has become, for me, one of those actors whose mere presence onscreen makes me primed for laughter. He plays Willy, the manager of the pool where Brandy works as a lifeguard. Also in a lifeguard perch at the pool is Rusty Waters (Scott Porter), who Brandy has targeted to be her deflowerer.

As with most teen sex comedies, there’s that person who’s always been a friend but has kept unrequited love for the main character hidden. In The To Do List it’s Cameron (Johnny Simmons). He is the beneficiary of a certain sexual favor on the list, the conclusion of which prompts him to shout out to Brandy, “I love you!”

Brandy’s mom and dad also weigh in on their daughters’ sexual exploits. Mom (Connie Britton) is realistic and helpful. Dad (Clark Gregg) is a straight-laced judge who wants to know as little as possible. Also vital to the story are Brandy’s gal pals, Fiona (Alia Shakwat) and Wendy (Sara Steele), who offer feedback, but are impressed by Brandy’s exploits. Donald Glover and Andy Samberg each have minor roles in the film.

The To Do List is set in Boise in 1993. Brandy, Fiona and Wendy are anxious to watch chick flick Beaches together. Email is referred to as “electronic mail.” And Brandy’s first “all the way” time is to the accompaniment of “Dreams” by the Cranberries.

Aubrey Plaza is a funny woman. As anchor of a strong ensemble, her talent and charm shine through. The To Do List should help her move up a notch or two on the comedy casting pecking order.

The To Do List is not for those who are offended by sexual terminology. It’s probably not a good first date film. But it is pretty dang funny!

Before I saw “That’s My Boy,” I asked a friend: “What was the last decent movie Adam Sandler made, ‘Fifty First Dates?’” That question, I am sad to report, is one that can still be asked.

Not that “That’s My Boy” doesn’t have some funny stuff. It does. But this is a bad movie with too much business going on. Could an editor have made the movie better by cutting out, say, 25% of the movie? Yes. That would make it 25% less painful.

Sandler plays a ne’er-do-well named Donnie who, as a high school kid, fathered a baby with a Mary Kay Letourneau type teacher. The teacher went to prison and Sandler’s character eventually got custody of the baby. He was a horrible father—so bad that the son changed his name when he grew up and cut off all connection.

After being notified by his attorney that he needs money to pay back taxes, Donnie sees his son’s photo in the paper. The son, played by Andy Samberg, is now wealthy and about to get married. Donnie crashes back into his son’s life and becomes a big part of the wedding weekend.

The movie is rife with crude, raunchy humor. The most uncouth character, of course, is Sandler’s Donnie.

Among the supporting cast are NY Jets coach Rex Ryan as Donnie’s attorney, sports anchor Dan Patrick as a Jerry Springer type talk show host, Tony Orlando as Samberg’s boss, Vanilla Ice as one of Donnie’s old friends, James Caan as a priest, Susan Sarandon as the modern day version of the teacher and SNL’s Will Forte as one of Samberg’s co-workers. Sandler takes a huge artistic risk with this movie by NOT including his buddy Rob Schneider in the cast.