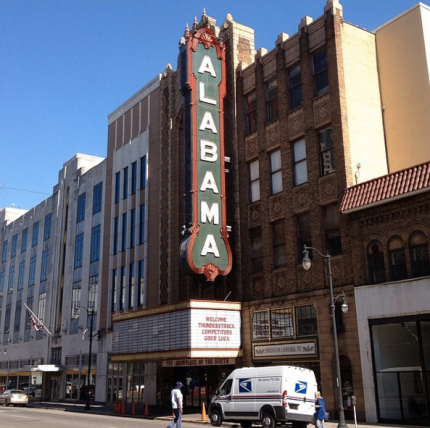 I miss going to the movies. Watching films on TV during the pandemic is better than it was just a few decades ago, thanks to big screen HDTVs with better sound. But the experience of getting out of the house, going to a movie theater and seeing a film with an audience is not matched by home viewing.

As I lay awake a few nights ago, I thought of some of my personal favorite movie going experiences. Let me share.

In 1961 my mother checked me out of school early to go see a matinee of Gone With The Wind. I was a 10-year-old sixth grader. She had told me it was long. She told me about the famous closing line. She told me how big it had been when first released two decades before.

We saw it at the Alabama theatre (“The Showplace Of The South”) in downtown Birmingham. Despite its length, I was glued to everything that happened onscreen and realized, even at my young age, that it was special.

I saw GWTW in its next release in 1968, also at the Alabama theatre.

In 1966, I had wheels and took a girl I had met at church camp to see a wacky British movie called Morgan! at the “art house” type cinema in the East Lake section of Birmingham. I found the movie hilarious; my date did not appreciate it so much. Morgan! has since faded into obscurity despite Vanessa Redgrave’s having been nominated for a Best Actress Oscar for her work in the movie.

A year later I saw To Sir With Love at the same theatre and, as I recall, it was the first time a movie ever made me cry. (Although I don’t recall my precise response to Old Yeller a few years earlier.)

In 1968 I saw Mel Brooks’ legendary film The Producers in its original release at East Lake. You may recall that the movie, unlike the play within that movie, was a box office failure in its first incarnation.

In 1967, I saw Psycho. Not in a movie house but in the dining room of my freshman dorm at the University of Alabama (Tuscaloosa). I’d heard of the movie but really had paid it little mind when it came out in 1960. Yes, I’d heard about the shower scene and it lived up to its hype but it was the ending of the movie that blew my mind.

In the summer of 1969, I lived in Atlanta. I rented a studio apartment in the Buckhead area and was happy to note that right across the way was a neighborhood movie theatre. I thought “Wow, I’ll get to see new movies every week just a few steps away from my place!”

When I rented the place, the theatre was playing The Killing Of Sister George. When I moved in the following week they were showing Goodbye, Columbus, which I went to see almost immediately. I liked it. (I had seen Ali McGraw a few weeks before when I was in New York and attended a taping of The Match Game. She a celebrity panelist and she was gorgeous.)

Well, the theatre kept Goodbye, Columbus as its feature all summer long! I did see it one more time.

In 1971 I had graduated from Alabama, quit my radio job in Tuscaloosa and moved back home with my folks to seek out my next big gig. While hanging in Birmingham I went to see an anti-war movie called Johnny Got His Gun. The theatre in the Green Springs area appeared to have been a retrofitted metal industrial building and had a cheap vibe about it. Also, it was cold that winter night and cool inside the theatre so I kept my coat on.

I knew little about the movie but was curious. It turned out to be one of the most depressing films I’ve ever seen. I remember the flashback scene where the guy recalls his workplace Christmas party. The business’s owner stands to the side repeating the words, “I am the boss. This is champagne! Merry Christmas!” That was funny. But the rest of the story was rather grim.

Just a few weeks later, I had landed that big gig—in Davenport, Iowa. Shortly after I started, I was invited to an advance screening for Cabaret. I had seen the opening number from the Broadway play (with Joel Grey as the emcee) on the 1967 Tony awards show. But knew little about the story.

I wasn’t prepared to have my socks knocked off. I’d expected some light entertainment with songs. But I was wowed. I remember one of the newsmen from my radio station did an official on-air review of the film and he did not like it. What was up with that? It won 8 Oscars, by the way.

After Davenport, I moved to the Twin Cities. My wife and I attended lots of movies there. Blazing Saddles, American Graffiti, The Way We Were, etc. But the most memorable movie going experience we shared there was in January 1974 when we saw The Exorcist.

We’d heard about people leaving the movie with various physical reactions, but figured we could handle it. Well, it haunted my wife so badly that, when we drove by a drive-in showing it several months later, and she got a brief flash of it on the screen, she became upset. To this day, any mention of that movie in our house is something I carefully avoid.

Later in 1974 we were living in Houston and, because we had no babysitter, we took our young son with us to see the R-rated Chinatown. We figured it would be okay because it was a lightly-attended midweek matinee. And he was a well-behaved child who napped through most of the movie. But he did see and was as shocked as we were by the scene where Jake Gittes gets his nose sliced. Ouch!

In 1977, we were living in the Erie PA area when Star Wars opened. We began hearing things about it and in short order we went to the theatre at Millcreek Mall and were impressed by the special effects. Up till then, outer space effects always—ALWAYS—looked hokey. But when Star Wars came out, they looked fantastic! Of course, now we look back and the whole movie seems a bit hokey. (Sorry if I offended your Star Wars sensibility with that last sentence.)

In the mid 1980’s we found ourselves living in Jacksonville, Florida where we attended a preview showing of Ferris Bueller’s Day Off at the Regency Square theatre. The whole movie is a classic but the closing credits are particularly well done. So we stayed in our seats until the bit where Ferris comes back onscreen telling everybody to go home, the movie’s over.

A few weeks later I got a call at my radio station from a local TV producer I had done some work for. He asked it I could get him a tape of the song Danke Schoen by Wayne Newton. I asked why he would want that. He said he and some friends were throwing a Ferris Bueller themed party and had to have that song!

In early 1994, several weeks after its release, my wife and I went to Des Peres Ciné in suburban St. Louis to see Robin Williams in Mrs. Doubtfire. We had heard good things about it and finally got around to seeing it on a weeknight in the middle of winter.

The theater was nearly empty—just a few others on hand—but we roared. Seriously, we laughed often and quite loudly. The only other time I can recall laughing so much was at the screening of There’s Something About Mary a few years later.

Early in our new century I saw my first Wes Anderson film, The Royal Tenenbaums. The media viewing was held in a screening room at the Ritz-Carlton hotel in Clayton MO. That was both the first and last time I have ever known of a movie to be screened at the Ritz. Who knew the Ritz had a screening room?

I have since come to appreciate Anderson’s quirky, stylistic movies and include Moonrise Kingdom and The Grand Budapest Hotel among my favorites. But that day, as one unfamiliar with his previous movies, I found the film amusing but not “laugh out loud” funny. But a couple of people in the crowd guffawed over and over at lines and actions that were not, at least to me, worthy of such reaction. I wondered if I was missing something or if I was not hip enough to get the joke(s).

On March 10 of this year, I saw the action-comedy movie The Hunt at the Hi-Pointe Backlot theatre. It’s a small capacity venue and a comfortable spot for a preview screening. And the popcorn’s good, too! That was the last time I saw a movie in a real movie venue. I look forward to getting back. When it’s safe.

One response to “Memorable Movie Going”