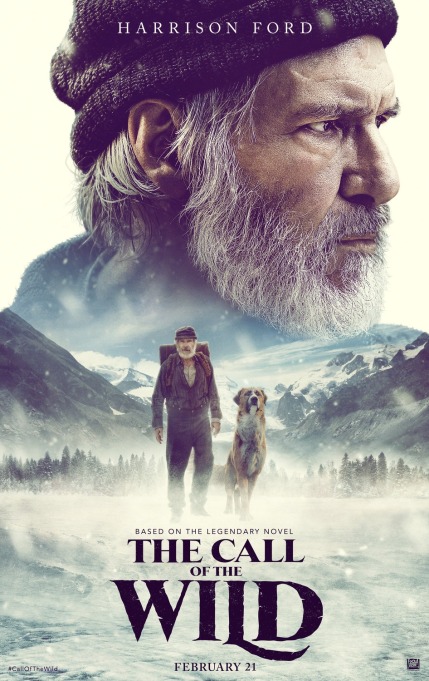 If you see The Call Of The Wild, you will understand why it’s better that the filmmakers used a computer animated- dog instead of a real dog. Stunts and fights might’ve put a real dog in peril.

Buck, the big galoot of a dog, looks almost real. He does things Rudd Weatherwax could only imagine his dogs doing. (Look him up if you need to.)

But the reason you want to see The Call Of The Wild is not just to see how the animals are rendered. You want to experience the story of Buck, a 140-pound St. Bernard-Collie mix, and how he copes with dognapping, cruel mistreatment, work on a sled team and a fight to be top dog.

Buck also discovers his connection to the wolves he sees, hears and imagines during his time in Alaska.

His human benefactor is John Thornton (Harrison Ford) who takes up for Buck and ultimately takes him in. Their interspecies bond is heartwarming. The communication between the two reveals a closeness many of us aim to have with our pets. (Although most of us might not care to have our dog monitor and police our drinking habits.)

Harrison Ford, who turns 78 this summer (a smidge older that Joe Biden, a smidge younger than Bernie Sanders and Michael Bloomberg), sounds older but looks amazingly spry for an old guy. He, of course, remains a favorite of many movie fans. Much of that fandom likely has as much to do with his many iconic roles as with his personal charisma and talent. It’s almost always good to see him onscreen and it is good to see him in this role.

The Call Of The Wild film, based on the classic Jack London novel, is not a “must see” movie. It entertains but lacks elements to elevate it to the beloved status of the book. Does it have the appeal of, say, the classic Disney dog movie Old Yeller? Not hardly.

Disney spent a ton of money to create many cool visuals in The Call Of The Wild—not just the CGI animals—and will likely recoup some of that budget when the film trudges over to the new Disney+ streaming service in a few months, resulting in more signups.

The Call Of The Wild is rated PG.