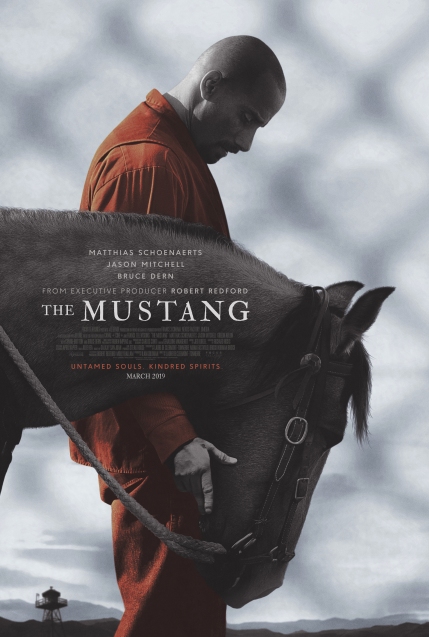 Horses are magnificent creatures. Like humans, they can be out of control. Wild.

In The Mustang, men who are behind bars in a Nevada state prison are given the opportunity to help tame wild mustangs. Like the men, the mustangs have been herded into pens.

Roman Coleman (Mattias Schoenaerts) is an angry, violent inmate. He’s had time in solitary. He tells the prison therapist (Connie Britton), “I’m not good with people.”

When given the chance to work in the prison’s horse program, his first days are spent shoveling manure. Later, with guidance from the program’s crusty leader Myles (Bruce Dern), he learns techniques to calm the horses.

And, of course, Roman’s process parallels that of the magnificent creatures.

But The Mustang layers more elements atop this simple story of reform and redemption. Along with interactions with the horses and his fellow inmates, Roman has several visits from his daughter Martha (Gideon Aldon). He even makes a sort of friend when fellow inmate Henry (Jason Mitchell) helps him handle the horses.

He expresses regret to Martha for his violence that damaged her mother. He listens as Martha talks of caring for her mother after the incident. He sits in a group therapy session with the therapist and hears that other prisoners had similar violent outbursts that led them to prison. He begins to communicate and show a bit of humanity.

The Mustang is the first feature length film by French director Laure de Clermont-Tonnerre. She opens the movie with beauty shots of mustangs running wild on the open range in Nevada.

The Mustang offers more than just another tale of a bad guy revealing his good side and being capable of empathy. It shows the grisly existence of prison. It also shows how a person may relate better to an animal than to another human being.